The crowds are gathered, with Apple devices clinched in hands, to await word from Tim Cook and other important members from Apple.  This was quite the impressive event, due to the fact that there were many new things introduced, updated and unveiled.

First, we got down to business with new innovation on Watch OS 2, shown proudly on the Apple Watch.  Health is the focus here, with doctors having the ability to help pregnant moms, to viewing the health stats of a patient that he is currently in transit to — big help and a good innovation here.  (These are likely enterprise only features that would not be used by the general public.)  Innovation is innovation, nonetheless.

Next, we get into Apple TV and the new iPad Pro.  Let’s start off by saying, the re-imagined Apple TV is just what Apple needed.  The previous generation was nothing short of horrific.  No apps, no apps and no apps.  If it couldn’t be cast by Air Play or use one of the built in features for the Apple TV, you were not going to watch it.  The new Apple TV features a curated version of the iOS App Store that has room for fun games and excellent interactive apps.  Then you have the new Siri enabled remote, which allows you to ask questions regarding movie titles and more and essentially guide you through your experience on the device.  Some question the amount of talking you are going to do with the remote in hand; however, the way it is designed — you may almost be forced into using the voice features.  The remote does not include a directional pad as the previous iteration did, it includes a swipepad.  However, the App Store addition alone is enough for owners of the previous generation to automatically upgrade.  Yes, do it. 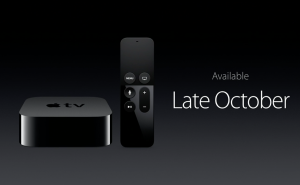 Let’s talk about the iPad Pro.  Apple’s new 12.9″ behemoth of a tablet, starting off at $799 at the lowest storage option, is seemingly the company’s answer to the Microsoft Surface tablet.  “The most powerful iPad yet” and they are not lying, this thing is a monster, paired with the optional keyboard cover and Apple Pen and you have quite the creation tool.  The Apple Pen will allow for intensive graphics creation from supporting Adobe apps, in addition to more creation inside of the Microsoft Office suite.  This tablet will certainly only appeal to a select audience due to it’s price tag and large size.  As we know the iPad Mini is the best selling Apple tablet, and it appears that it will stay that way, even with the introduction of a larger sibling.  Note that in order for you to have the full experience that Apple was touting, this setup with cost you a little over $1000, even at it’s lowest storage option (remember the mention of a select audience?).  Let’s not forget to mention that this guy is packing 4 speakers, making for a better stereo sound experience.

The part of the presentation that we were all waiting for, iPhone.  As we have come to expect, the S lineup is usually a small iteration on the lineup that came before it; however, this time is different for Apple.  This time, Apple has actually made big under the hood changes (that is, instead of making one new change and making you shell out more cash for something trivial).

[Source: CNet, Everything you need to know about the iPhone 6S]

Is this “S” iteration worth the upgrade?  As with any S upgrade, it’s up to you, as history shows itself, the S is always better than the previous, it is hard for me to understand why you would buy any Apple phone that’s not the second generation, as you don’t have to have every iteration.  Users of the iPhone 6 may not wish to upgrade so soon, but if you are carrying around a 5S, this is almost a must buy.

Overall, this was the best press event of the year (to date) in regard to releases and news from from the presentation.