Coming off of the helms of the iPhones X, 8 and 8 Plus this year it was rumored that we’d receive a new Apple Watch alongside 3 new iPhones, which exact specifications and price we wouldn’t know.

Apple’s events are always touted as being “magical” and known for being master marketers, Apple is usually poised to have their onlookers shouting, “Shut up and take my money!”.

Does this ring true with the devices debuted today?

Welcome, Apple Watch Series 4 a slimmer, fuller screen smartwatch.  The Apple Watch is not only the number one smartwatch on earth, it is additionally the number one watch in terms of units sold.  The amount of features in regards to apps and health propel it, easily, past other smartwatch offerings from Android’s virtually nonexistent WearOS and Samsung’s Tizen, which powers the company’s Gear line.

In addition to the Apple watch receiving a slight facelift (don’t worry all of our Apple Watch bands from the earlier generations will work) there are new features also packed in.

First, is EKG or electrocardiogram.  Apple Watch Series 4 is the first over the counter, FDA approved device that features this technology, it’s been rumored to be included in an Apple Watch and this is a phenomenal feature to have aboard.  EKG is the process of recording electrical activity of the heart over a period of time using electrodes placed over the skin [Source: Wikipedia].  Taking an EKG on Apple Watch is as simple as holding your finger on the redesigned digital crown for 30 seconds.  Including this in a smartwatch makes this item much more than just a companion device or as some view it, “a toy” — it makes it a first class wearable that is deserving of respect.  All of the health data is saved securely to your device in case a need arises to be shown to a physician.

Second, due to the “edge to edge” screen of the Apple Watch Series 4, it will include more dynamic watchfaces and complications that can be used on the watch while keeping the same battery life as the previous generation.

Lastly, the Series 4 watch includes fall detection.  Fall detection is vital, especially for the older demographic and thanks to the latest addition from another alerting device may be able to go the way of the Dodo.

Overall, Apple Watch Series 4 is looking to be an excellent upgrade from last years model and although it is not a must buy for all Series 3 owners, if you have Series 0 through 2 — please proceed to your closest Apple Store.

This is likely what you’re all here for; however, after seeing the release of Apple Watch Series 4 one could wonder if they could be pleasantly delighted any more.  iPhone X was Apple’s first attempt at a radical redesign of the iPhone, ever.  Not only was the home button no more, the orientation of the cameras changed and there were additions and subtractions made inside of iOS to account for the new display, including it’s hideous display notch — yes, it’s still there in 2018 devices, get used to it.

Gone are the days of new “Plus” models.  When it came to the Plus devices, they each offered a different experience when compared to their smaller counterparts.

Now that we have the “Max” model there aren’t any apparent differences other than battery size and screen size 5.8″ versus 6.5″.

The new iPhone XS and iPhone XS Max devices are powered by the latest SoC from Apple, A12 Bionic, which not only provide improved overall performance of the device itself, but faster unlocking using FaceID.  FaceID, while regarded as generally stellar, was often noted as being slower than TouchID, which is notably fast and seamless.  Additionally, because of this new chip we get camera improvements and can now adjust the depth of field of a portrait mode photo after it has been captured.  While there have been third party applications that could do that because the image data is readily available, this feature is now natively available within the Photos app itself. All of these features topped with the pleasant addition of IPS 68 water and dust resistance, up to 2 meters, comparable to devices such as Samsung Galaxy S9.

Just when we thought that all was done, there was….one…..more…..device.

This is Apple’s low-cost iPhone, let’s call it like it is.  When your devices start of at $999 for iPhone XS and $1099 for iPhone XS Max, there needs to be another device for the majority of consumers and emerging markets.  Face it, in 2018 you can get a solid smartphone for $500 (eg. One Plus), we shouldn’t have to spend a grand to get a solid phone.  While one could argue about reliability, long-lasting support and other premises that take Apple’s devices from good to great — the aforementioned argument is solely based on price alone. 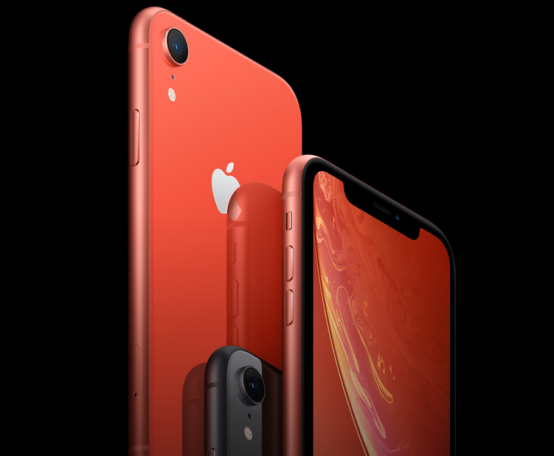 iPhone XR starts at $749 (in the buying options it doesn’t appear that this device can be purchased unlocked) and features a 6.1″ LCD display that forgoes 3D touch but doesn’t lack in many other areas.  It is notable that iPhones 6/7/8 all had LCD displays but all had 3D touch — seems to be an omission for the sake of differentiation.  Although it is LCD, Apple is touting it as the most accurate LCD display on a smartphone, which is likely true as Apple’s displays are individually calibrated for accurate at the factory and lead the industry in how accurate the representation of colors are.  XR also comes in a variety of colors to spice things up, while having only a single lens camera, which differentiates it further from the XS and XS Max.  Although there is only one lens here, the camera is still capable of producing portrait mode shots through the Google coined, computational photography, which Phil Schiller almost winced while saying.  Otherwise, the device could be confused with a X, XS or XS Max device as it features the same stylings and notch, which also houses the same True Depth camera and sensor array that is used for FaceID.

In short, Apple knocked it out of the park here, especially with pricing.  While iPhone XR could come in at an even lower pricepoint to shake up the market, $749 is a pleasant surprise, while $1099 for iPhone XS Max is as well as we are used to seeing a $150 or more markup for the larger devices year over year.  As of this event below is Apple’s new iPhone lineup:

iPhone X is no longer in the lineup and will not be sold going forward.

Of course, there were new updates to iOS, which will be pushed out in iOS 12, Monday, September 17th.

With all of the hype surrounding an Apple event, there are always devices and services rumored to be released and/or updated that simply do not get the attention we thought they’d get.

Most notable is Apple’s AirPower mat, which was promised last year — STILL is nowhere to be found, without as much of a mention from Apple. Not only would this be a great companion to this iPhone lineup, which has Qi “wireless” charging support, it would show users that they’ve taken this product seriously.

Then, iPads, Mac Mini and AirPods. All of these items were longshots and will ultimately receive their own event when and if they are updated this year. This was an event all about iPhone and it’s number one companion, Apple Watch. Here’s to another fall or early winter event from Apple.

It is safe to say that Apple is once again firmly in the lead in many areas after this event.  When it comes to companion devices and Apple Watch, there is no question, while the iPhone XR gives premium features at a reasonable cost.