With Mark Zuckerberg and Facebook facing incredible scrutiny from the United States government, to Apple’s Tim Cook calling out the company and industry insiders lining up to tell you to delete your Facebook account are we missing the larger issue with privacy?

I’m here to argue that most consumers, especially those arguing against Facebook and standing up for other companies, care about privacy inside of pockets. What do I mean? Let’s look at those who side with a company, taking Apple and Tim Cook here or if you’re siding with any company without first taking into consideration privacy as a whole. Let’s ask some important questions:

The internet itself in 2018 is almost not private by default. It’s a sad reality, but it’s the truth. Seemingly harmless websites are stuffed with ad trackers causing slow page loads and hampering the overall experience all while gathering plenty of analytical data for the site owners to target you — even sites of publishers claiming to care about your privacy.

Do not trust any entity. There is no company on this earth, including Apple, Google, Amazon or others, that deserve your complete devotion to their security practices. You should scrutinize each and every company, especially those that say they value your privacy.  So what can you do in a world that is seemingly less and less private?

This is a hard topic and one this will be increasingly difficult to manage and maintain as more and more online systems are integrated into our lives; however, with diligence we can maintain a decent level of privacy and security in our lives — it just takes time and effort.

In an age where governments spy on it’s own, common carriers such as AT&T and Comcast want to sell your data for profit and the NSA can spy on every communication channel that we have — is it so much to want a taste of anonymity online?

VPNs, Tor and other privacy tools have become synonymous with the “dark web” and online hacking; however, these tools are built to protect users; however, intelligent individuals can also use them to get away with certain activities online.  But what about the sophisticated user, who simply wants to protect his internet traffic from prying eyes and be safe online?  Why do some look at those people as if they are doing something wrong when they aren’t?  It’s simple: they are biased and ignorant.  Not only are they biased, they may not fully understand the technology if they only limit it to one side of the equation.

I’ve spoken in depth about how VPNs (Virtual Private Network)s work and how I really don’t believe you should connect to the internet, especially any public WiFi without first being connected to one because it sends all of the traffic from your device through an encrypted tunnel to another host that allows you to browse the internet in that fashion, making your traffic look like a jumbled mess to anyone trying to snoop.  (Of course remember to sign up for a VPN provider that doesn’t log, such as Private Internet Access).  So, what is Tor?  Tor is a protocol that was actually implemented by the US government that sends your traffic, encrypted, through a series of relays (relays are formed from machines that are volunteered to the Tor network), usually thousands before reaching the final destination.  Usually browsing the web through Tor is a little slow because of this.

The one thing that a VPN and Tor has in common is that when viewed on a network where no one else uses these tools, your network traffic will look quite different, which could lead to someone believe that you are doing something insidious; however, now that you know how these tools work, you won’t think that way anymore, right?

TLDR; Since our electronic landscape is becoming scrutinized more and more to serve us ads, track us down and garner our personal information without our consent, users have the RIGHT to protect themselves, we’re not all hackers, most of us just want our information we transfer online to be private — deal with it.

Let’s give a round of applause to our excellent administration, huh?  Crickets.
When you think of lawmakers, you think of people, who have the best interests of the people in mind, not the best interests of businesses; however, this is exactly what we are seeing with the most recent news from Washington.
The Senate voted to repeal a set of rules that were established to keep consumers (me and YOU) data safe by barring ISPs from selling and sharing usage data.  Nowadays, everyone wants to be the next Google or Facebook and have all of your data.  Some companies are straight-forward with what they do with your data, like Google — others are a little more nefarious.  It is clear that this is a move to sponsor more business activities on the sides of AT&T, Comcast, Verizon and others — not protect the people.
Isn’t our data going through enough channels already?  Now, we additionally have to worry about what are ISPs are going to do with our information — while they should be doing nothing more than providing the pipe for access.
This is nothing more than a pathetic money grab.
What should you do?
TLDR; Senate votes to kill internet privacy, let’s hope the House stops it.

Fear, stutter and shake at the big bad Google, Apple, Yahoo and others — these companies are here to invade your privacy, steal your data and give you no way of understanding and seeing what they are doing.  False — at least not for all of these companies that are in the public eye.
This is how companies make their money
First, all companies that provide a free service are not out to get you.  Your data is NOT more important or special than anyone else’s.  But….  Your data is how you pay for a free service.  Let me explain.  Companies like Google make their money off of ads and serving those relevant ads to you.  In fact, 89% of Google’s revenue comes from serving ads.  Where do those ads come from?  Typically, search results that you enter and things that you click.
Companies are matched to a user based off of what they have entered into the search bar and pay for being promoted.  This type of promotion is called Google AdWords, learn more here. 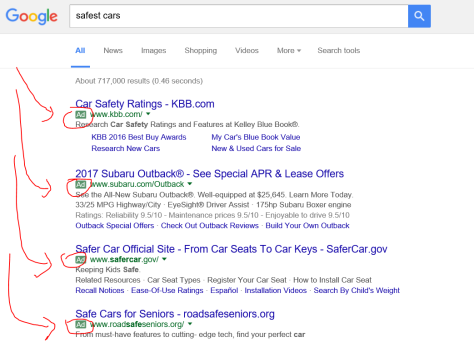 Since more and more queries are being pushed into search this model tells companies that having an online ad would be value — making them pay top dollar to be placed in that section.  Additionally, there is a publisher program called Google AdSense and it allow webmasters to make money by displaying relevant ads on websites and blogs, learn more here.
Data Collection
Companies collect data off of you that you willingly provide.  Yes, I said willingly.  Terms of Service is one of the biggest “gotchas” in the industry, primarily because people don’t take the time to read them and wonder why company XYZ suddenly has their email address.  If you take the time to browse through you can easily see exactly what information the company will give away and what will not be given away.  If we continue to look at Google, they benefit off of not selling your data, instead they house that data to be used in-house between other connecting Google services, which in turn makes YOUR overall user-experience that much better.  If you need to know more information, check out Google’s privacy policy for yourself here.
Bottom line:  If there is an ad you don’t like from Google an email you don’t appreciate getting, go through the necessary channels and stop it from happening.  Google’s My Account dashboard will give you a bird’s eye view into your account — that is something that 99% of other companies that collect data will not do.  This page will allow you to tailor the experience that you get and change the types of ads that you see.
Most importantly, just remember that these options are there rather than complaining that a company is stealing your data.  First, look into the company and their privacy policy, it may just surprise you.  All of these companies are not evil and out to get you; yet, they are trying to make money just like you.  There are services in this world that can truly make your life easier and if you are afraid of typing something into a search box — then you deserve to miss out.

So, when I am served ads in Google Chrome and other Google products, I understand, why because I’m feeding Google my search information, they don’t sell it –regardless of what you may think; however, at least I am getting something out of it, free software products.  The issue here is when I am seeing a random ad in my Twitter or Instagram timeline, it is literally enraging.  From sports ads to random apps that “I should” install are what I am presented and every time I click “I do not want to see this”.

Why do we see ads?  That is the question.  Simple.  Companies that we are engaging with need to make money and money is made by ads being served, it helps the developers and companies continue forward and provide us with an app and service that we get to take advantage of — for free.
Does this mean that all companies are out to get you and your information?  Yes and no.  Most companies that retain your information for their use will formally let you know in the EULA’s (End User License Agreement) but I guarantee that you’ve never read one from end to end.  Let’s start with Google for example.  Google built their company off of the promise “Don’t be evil” — I won’t explain it here, just look it up.  However, more and more that statement is becoming murkier and murkier and users complain that their data is being compromised; yet, let’s look at it a bit deeper, shall we?  There are many companies whose names that we do not even know that track our every grocery bill and more; however, when we have an accessible company such as Google, we automatically assume that their are harboring data and selling it to everyone.  I will tell you, yes you, that you are wrong.  Google serves you ads and recommendations only off of information that you provide and only that way are they able to provide useful information and products in return.  Let’s make the comparison here, the toolbar that you installed on Firefox or Internet Explorer will gather information and shoot it to a company you don’t know.  Google on the other hand records your searches, reads your emails (which all email clients do, trust me) in order to provide you with useful services for free.  Google Now, one fantastic service would be rendered useless if Google didn’t have that information.  That boarding pass that has flight information, you’d never be notified when you got near the airport.  That meeting that is scheduled for tomorrow, you’d forget about it if it wasn’t added already to your calendar.  That ad for soap you saw that links you to Amazon, wouldn’t be fueled if you hadn’t searched for it.
This is information that you are providing and it only makes your experience better.  Still unsure about Google’s privacy policy?  Go here https://privacy.google.com/ and learn more, in fact all companies providing you free information and services you should examine their policies, that is even if they are as readily available as Google’s.
Bottom line:  Don’t be afraid until you know.  You should want to know.