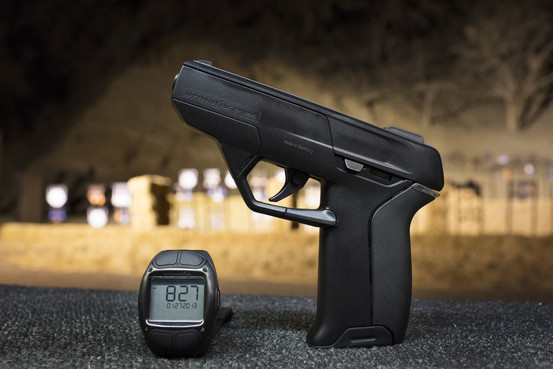 For years we’ve had countless members of our government, primarily liberals, that have spoken out against our lackadaisical firearm laws in the United States. Not only do we have some of the weakest laws on the planet, we also have increased school shootings and acts of localized terror — irregardless of if current presidents agree on the terminology. It is truly a shame that citizens can easily obtain military grade weapons and use them on others. What’s even worse is that it is even more apparent that the NRA seems to be in the ears of half of our political system. Why? Money and power.

The looming question is that since we have technology creeping into every part of our lives — why aren’t there more technological controls on and around firearm safety?

Should smart guns ever be a thing? It’s been talked about and prototyped but it doesn’t seem that one of these things will ever see the light of day. Is it simply because it’ll disrupt a booming American industry? I think so.

So often are technologies put on display that wouldn’t even allow an operator, not considered the “owner” of the firearm, to discharge it without fingerprint authentication.  However, as usual with big business being behind every aspect of American life — it would be a travesty to allow a company to come in and instantly make our great “‘MERICA’ safer.  The NRA is a major driving force of why smart gun adoption is not growing in the United States, to think that an organization that things each citizen should have an entire militia at their disposal would want any gun.

The NRA believes that smart guns could open the door into banning other firearms.

I agree whole-heartedly.  This is a conversation that should be had.  It’s one thing to own a gun; however, if you’re not military — you don’t have the right to walk into a gun show or pawn shop and purchase an AR-15, it is absolutely asinine.  The same logic applies that me, Dexter Johnson, being a Database Professional, can’t go buy surgical equipment — why?  Simply because I am not a surgeon and I do not require those tools.

Technology literally fills every part of our lives and it is truly sad that certain groups are holding on to guns as if they are the mark of freedom, an ignorant statement that gets the story wrong consistently.  Other countries do not have the mass shootings and gun related incidents that the US have because of steeper laws on the ownership and possession of firearms.  Additionally, let’s stop changing the narrative that I hear on repeat, “people kill people” and “the person was mentally ill”.  No one should make it considerably easier to commit murder and that’s what lackadaisical gun laws do and 30,000 gun related deaths (Source: CDC) in one year is not “ok”.  As Barack Obama said, “We are not trying to take your guns away.”  However, it is 2018 and we have fingerprint sensors, retina scanners, facial recognition technologies, AI and more that could be tied to a gun and built into it that not only could it only fire for a particular user, maybe, just maybe not fire at all if even aimed at a human.

The largest issues here are when, not if — authentication on a firearm fails.  Let’s not forget that.  Does your iPhone unlock EVERY time you look at it or every time you place your finger on the fingerprint sensor?  No.  No technology is perfect; however, it works within a high enough percentile placing the acceptance rate at nearly 100%.  This is the primary argument against smart guns.  However, the same can be said about mechanical failures — they also happen without “smart” technology built in — yet, that conversation isn’t had.

Smart guns and an actual protections and trainings of the potential buyers, while not the only answers, can help bring down gun related incidents in the US, let’s just hope that our overly-conservative, NRA fearing administration can see that.  For everyone else working with technology, let’s find a way to keep this story at the forefront of our minds because technology can help if allowed to.

Keep in mind, that I don’t talk just to hear myself, I’ve provided a link to fast stats at CDC so that you can see the numbers for yourself as well as explore other statistics that are for public consumption.