Tech Elitism has to Stop! (Rise of Technocentrism) 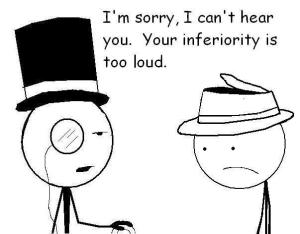 All answers to these questions are a resounding NO and I’m getting sick and tired of it.  This gives rise to a new term about those who think their tech is better than everyone else’s — “technocentrism“, you heard it here first.
Phones
I’ve listened to some of the most bigoted and contrite debates in the tech world regarding Android and iOS and in the past, I’ve been part of them.  But let’s face it, each mobile operating system and hardware manufacturer has their pluses and minuses.  Let’s take Android and break it down.  There are thousands of phones, no clear direction, laggy interfaces and buggy software implementations.  On the other hand, there are solid reference devices made by Google, which perform questionably better than most other offerings, valuable choices from OEMs and customizations that make owning a device worthwhile.  Let’s look at Apple and iOS.  There are only 3 choices, no customizations and software and interfances that you cannot control.  On the other hand, there is a fantastic ecosystem with minimal bugs, great implementation from top to bottom and simply great performing devices that you can count on.
Games
PC versus console, it never gets old.  PCs can be upgraded, while consoles cannot.  Consoles promote gaming together with people in real life due to numbers of connected controllers.
Do all of these things really matter?  Or are we missing the point?
Sure, it’s fun to debate about our gadgets, but that’s where it should end.  Owning one device over the other does NOT make you superior to those that do not.  I could call out names of podcasts and writers who portray this attitude, but I digress.  Needless to say, some of them should really get over themselves.