With Google’s latest Android announcement around the corner; Android fans, myself included, are on the edge of their seats.  There are many predictions to be had regarding what Google will show us on Monday, October 29th. 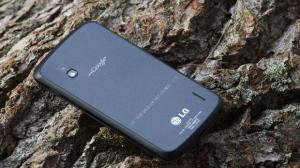 However, one thing is almost for certain:  We will see a new Nexus device.  What exactly does Nexus mean you ask?  Pure unaltered Android without lousy carrier or manufacturer modifications.  That means no extraneous bloatware can spoil yet another glorious Android device.  In addition, it is rumored that there will be a slew of new Nexus devices from many manufacturers just waiting to grace your pockets with stock Android greatness.  On the other hand, it would honestly be fantastic if Google would allow any OEM to “create” a Nexus device just by following strict guidelines:

Instantly we would have a variety of top-tier Android devices that were powered to get the job done.  This would be good for consumers as well as Google because it would put that confidence back to the Nexus name, which is one that Verizon almost put a black mark on by withholding system updates to their version of Samsung’s Galaxy Nexus. 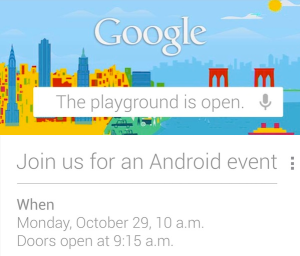 Additionally, it is speculation that Google will refresh the Nexus 7 line by introducing a 32 GB model and potentially a model with 3G/4G support.  Speaking of powerful tablets; Samsung is rumored to be making a 10-inch Nexus tablet for our enjoyment.

On the other hand, this all boils down to a possible update to the Android operating system, which is currently at 4.1.2.  Yes, Android 4.2 (Key Lime Pie) is on the horizon.  Does Android need a new full-update or an incremental update.  Remember, Android 4.0 and 4.1 together have a combined marketshare of 25%; so, is this the best time for a new version to be released?  It seems that OEMs typically put either the latest or next to latest version of Android onto the devices they build so, just as a new version will be a good thing for us early adopters — how long will it take to penetrate the market?

Bottom line:  What happens at Google’s announcement will likely awe us.  Be prepared for a new Nexus device of sorts and if a new version of Android comes out, be prepared to sell it to your friends — let’s help take away market from Gingerbread ( Android 2.3) and give it to finer tuned versions of Google’s OS!