More and more lately while digging through reviews, there are instances of people jabbing Google (such as CNet) for making their services the highlighted ones on a device that IT is selling.  No one has ever complained that Apple forces you to use iTunes or that Amazon forces you to use their proprietary ecosystem — so why is Google being singled out here? Absolutely nothing new.

Singlehandedly, Google has taken the mobile industry by storm quickly catapulting Android to the forefront.  The company has had many “stabs” at the living room: Google TV, Nexus Q, Chromecast (which is great) and the newly introduced Android TV (this platform builds in the ability to cast in addition to full game support that can really bring a rich experience to the end user). 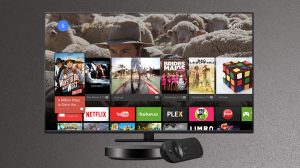 It seems more and more in reviews that Google just cannot get it right in the eyes of the reviewers at some tech centered websites and it needs to change.  Many often complain that it only has 8GB of storage, which is exactly the same amount as Apple TV and Amazon’s Fire TV.  Learn to see the promise of the vast ecosystem that google brings to the table and how it can potentially reshape the pathetic living room experience that is dominated by Comcast and Time Warner.

The latest Chromebox from ASUS is bringing us techies a lot of excitement — rightfully so.

As a Chromebook owner, it is easy to see the delights and appeal of this friendly and easy to use OS (essentially Google Chrome with extensions and web apps) and see the power of having a small Chromebox (desktop version of the Chromebook) attached to a large display, such as your HD TV.

Think of the possibilities of having a desktop operating system on your TV. The entire internet will be right on front of you with no compromise. Google TV attempts to bridge the gap between an app ecosystem in Android and some say that it has not been successful.  As a Google TV owner, it is a great experience with a few shortcomings; however, this solution might be viable due to the ability to bring the entire Chrome ecosystem to your set.  Note, this is not the first Chromebox just the first Chromebox with this small form factor.

Bottom line:  Grab a wireless keyboard and mouse and you have a full entertainment system in front of your eyes.  This is definitely a step up from Google TV, which is missing critical apps such as Hulu Plus.

Where is my Nexus 7?

The Google Nexus 7 has been the biggest tablet release of the year.  This product sports Android 4.1 JellyBean, a quad core processor, 12 graphics cores, scratch resistant glass all for $250 or less.  So, there is no wonder why all of those who pre-ordered cannot take the wait any longer.

The aspect of the pre-order that seems to anger those who participated are that eager buyers went directly into Sam’s Club and came out with a device the same day.  I actually ordered my device on the day it was announced during Google I/O (along with millions more) and yet I am still patiently waiting the arrival of my Nexus 7.

Bottom line:  Some are mad — however, there is nothing that we can do except wait for our beautiful game-changing 7 inch tablets to arrive at our doorstep.  In addition, calling the Play Store 1(855)836-3987 will lead you to a message informing that pre-orders are indeed shipping.  Realize that once you have this device in your hands, all of the turmoil will instantly leave.

Everything that you could have ever wanted in a 7 inch tablet is here.  What is that, you mat ask?

Some are calling this an Apple iPad killer, others are calling it an Amazon Kindle Fire killer, I am calling it a staple in the tablet market with an unmatched experience that is topped off by Google Play.  When Google first switched the Market to the Play Store confusion was in every corner of the Android world; however, with Play Books, Play Movies, and Play Music on Android devices we saw how it could be tied all together.  We all know that tablets are media consumption devices and what better way to consume media than Google Play.

The Nexus 7 is built by one of the leading tablet manufacturers for Google, Asus, so the hardware is not lacking in any area.  In addition, Android 4.1 (Jelly Bean) really shines; taking Android to the next level.  This latest software iteration introduces Chrome as the default browser, new notification interactions and takes full advantage of Google’s Project Butter, which focuses on the operating systems responsiveness — as if Android 4.0 Ice Cream Sandwich wasn’t fast enough, this next iteration is blazing fast.

Bottom line:  Getting the Nexus 7 really isn’t a choice if you are an Android purist and want a seamless device.  However, if you are in the tablet market for the first time this $200 (8 GB version) is well worth every penny and has the specs to keep up for a while!  In addition, for a limited time with purchase receive $25 of credit to spend in Google Play, other free content, and it includes a copy of Transformers: Dark of the Moon.  Buy the Nexus 7 [HERE]

People hate to admit it; however, when you provide such a build up for something great and you get less that what was expected; you’re always let down.  Honestly, it seems that Apple has been letting me down lately.  First, I am not an Apple fan; however, I am a huge fan of technology and it’s progress.  Yet, it seems like Apple loves to release a product that is seemingly the same as the previous generation, add a few new features, and sell it at full price.

Notable features that are in the new iPad are it’s beautiful retina display, 4G (something that many believed Apple would never adopt), and improved quad-core graphics processing (not the actual device CPU).  It is certainly safe to say that the next iPhone will have 4G capabilities as well.  While some might scoff at the fact that this product looks exactly the same as the previous model the iPad is still at the forefront of the tablet market until someone decides they’ve had enough.

Contenders for the crown:

Bottom line:  We might have been disappointed at the fact that the product looked the same; however they did improve the specs.  Let us see how the rest of the market reacts.